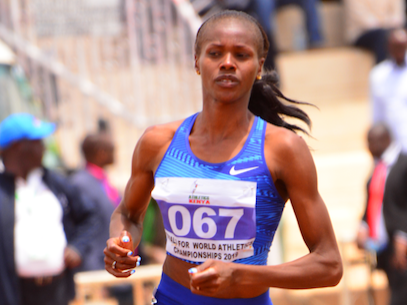 Sum, who hogged the international limelight after clinching the 800 metres title at the 2013 World Championships, will be deputized by Shujaa captain Andrew Amonde.

Given Sum is set to link up with the team much later, Malkia Strikers captain Mercy Moim has been identified to fly the Kenyan flag alongside Amonde during the opening ceremony of the 32nd edition of the global showpiece.

Moim said she felt greatly honoured to have been handed such a huge task.

“This is a good surprise and a great honour to carry the flag of Kenya. I was not expecting it, if I look at my journey as a girl from a small village called Kaboiyo, I am elated and even more motivated to ensure our national anthem is sung during the Olympics.’ said Moim.

Sum has hinted this could be her last major competition and tipped a new generation of vibrant athletes to take over the 800m race in the absence of seasoned competitors such as Caster Semenya.

“We will have stiff competition as this Olympics has a new generation,” she said.

Sum will fly the Kenyan flag in the 800m with compatriots; Mary Moraa and Emily Tuei.

Sum expressed fear Kenya might be losing grip on the two-lap race, having won their last gold medal in the women’s race.

“I hope in the near future Athletics Kenya and concerned athletics stakeholders should invest more in the upcoming talents to fill any loops in the 800m race.”