Super Eagles of Nigeria will on Tuesday night, 27 September, be engaging the Desert Foxes of Algeria in what is expected to be a keenly contested battle between these two giants.

Going into this encounter in Oran, Super Eagles during their last test game were forced to a 2-2 draw by the Algerian Team B, and facing the 1st team this time around will be a good game.

Jose Peseiro who is the head coach of the Super Eagles has made it clear that he is building a team that can win the next African Cup of Nations, and Nigerians will be waiting to see the outcome of this game. 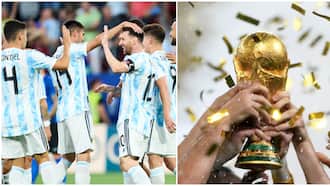 Interestingly, Algeria and the Super Eagles did not qualify for the 2022 World Cup in Qatar with the Desert Foxes losing the play-offs to Cameroon, while Nigeria were hammered by Ghana.

What is the head to head between Algeria and Super Eagles?

Since 2016, the Super Eagles of Nigeria have lost their last three games against Algeria and Jose Peseiro and his wards will want to turn the table around in this encounter.

Algeria will have to cope without 30-year-old defender Abdelkader Bedrane, who was forced off injured just six minutes into the game against Guinea.

Where will the match be played and time?

The match between Algeria and Nigeria will be played at the Miloud Hadefi Olympic Complex in Oran and it will start by 8pm. Earlier, Sports Brief had reported how William Troost-Ekong was forced to pull out of the Super Eagles coming international friendly game against Algeria and the defender is disappointed with the latest development.

Nigeria who are three-times African champions will be facing Algeria on Tuesday, 27 September, in a big battle that is expected to be challenging between these two African giants.

It is no longer a news that the Super Eagles will not be featuring in the 2022 World Cup in Qatar after losing the play-offs against Ghana, but Jose Peseiro and his wards are gearing up to qualify for the next AFCON.

William Troost-Ekong suffered an injury while training with his Super Eagles teammates and has returned back to his club for medical examination.