Last season’s Champions League winners Chelsea will square off against the Europa League holders Villarreal in the UEFA Super Cup on Wednesday.

It promises to be a fascinating game between the two sides who will want to head into the new season with a trophy.

Although it is a one-off game, winning the Super Cup will give the Chelsea players a shot in the arm heading into the 2021-22 Premier League season.

The Blues are expected to challenge for the league title this season, and will want to build all the momentum they can.

Chelsea are expected to sign Romelu Lukaku soon, but it’s unlikely he will be part of the matchday squad.

The club’s English contingent — Mason Mount, Reece James, and Ben Chilwell are not fully fit yet, and are not expected to start against Villarreal. The same can be said of Jorginho, who like his English teammates, played at Euro 2020.

Thiago Silva and Emerson too joined pre-season late following their exploits with Brazil at Copa America 2021, and will not make the Chelsea lineup.

Edouard Mendy featured regularly in pre-season, and is expected to start against Villarreal come Wednesday. The Frenchman had a solid debut season with Chelsea, and will look for consistency again this season.

The trio of Antonio Rudiger, Kurt Zouma and Trevoh Chalobah have started the last two pre-season games, and they could once again form the back three in the Chelsea lineup.

Marcos Alonso should start ahead of Ben Chilwell, who is still not match-ready. Callum Hudson-Odoi could play on the right flank.

Thomas Tuchel has the duo of Mateo Kovacic and N’Golo Kante available, and the two should feature in central midfield. Ruben Loftus-Cheek and Tiemoue Bakayoko are also options to call upon later in the game. 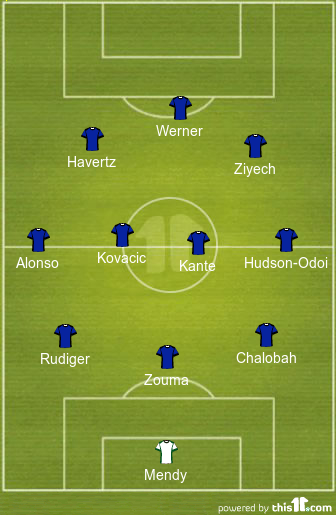 The likes of Chilwell and Reece James could get some playing time in the second half as they look to regain their match fitness and rhythm.

We expect Tuchel to go with the front three of Hakim Ziyech, Christian Pulisic, and Timo Werner starting in attack.

Werner should play as the number nine in the Chelsea lineup, with the duo of Ziyech and Havertz playing in the attacking midfield roles. Mason Mount could also get a few minutes off the bench.