Arsenal will begin their 2021-22 Premier League campaign with a tricky trip to newly-promoted Brentford on Friday.

The Gunners have strengthened their squad ahead of the new season, bringing in the likes of Ben White and Albert Sambi Lokonga. More arrivals are expected over the next few weeks as Mikel Arteta looks to build a squad capable of competing for a top-four spot.

However, they endured a dismal pre-season campaign, losing three of their six matches, including back-to-back defeats to Premier League rivals Chelsea and Tottenham Hotspur.

They will look to bounce back against Brentford and get their season off to a winning start.

Arsenal will be without a number of first-team players for their trip to Brentford. Thomas Partey picked up an ankle problem against Chelsea and faces a month on the sidelines. As does Eddie Nketiah, who is also nursing an ankle injury.

Gabriel Magalhaes will also miss out as he continues his recovery from a knee injury that forced him to miss the Olympics. Rob Holding also faces a race against time to be fit for Arsenal’s Premier League opener.

New signings White and Lokonga are expected to make their league debuts.

Let’s take a look at the possible Arsenal lineup for the game against Brentford.

Bernd Leno will start in goal. The German has been heavily linked with a move away from the club, but as of right now, he remains their first-choice ‘keeper.

Ben White and Pablo Mari will likely start at the centre of the defence. White put in a couple of impressive displays in pre-season and will be raring to make his competitive debut for the club.

Kieran Tierney is one of the first names on the Arsenal team-sheet and will slot in at left-back in the Arsenal lineup. The Scotland international was one of Arsenal’s best performers last season and will look to continue in the same vein.

Right-back has proven to be a problematic position for Arsenal in recent seasons. Arteta has three options to call upon against Brentford — Hector Bellerin, Calum Chambers and Cedric Soares. Each of the three started at least one game in pre-season, with Chambers impressing the most. He is likely to get the nod on Friday.

With Partey out injured, new signing Sambi Lokonga could make his debut alongside the experienced Granit Xhaka in the Arsenal lineup. The Belgian showed glimpses of his potential in pre-season and could be an exciting player for the club in the future. 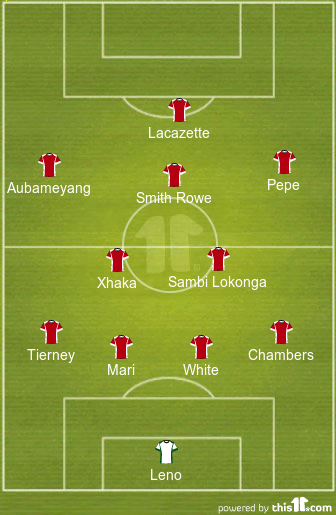 Emile Smith Rowe will be entrusted with the number 10 role. The young Englishman was rewarded for a stellar 2020-21 campaign with a new long-term contract in the summer.

Nicolas Pepe and Pierre-Emerick Aubameyang will retain their places on the right and left flank respectively in the Arsenal lineup. Bukayo Saka, one of Arsenal’s most exciting talents, is not yet fully match fit and could feature off the bench.

Alexandre Lacazette will lead the line for the Gunners. The Frenchman has been linked with a move to AS Roma, but for now, he remains an Arsenal player and will start up front against Brentford.