Liverpool will start their Premier League campaign with a tricky away fixture against the newly-promoted side Norwich City.

The Reds had a good first half of the 2020-21 Premier League season, but injuries to key personnel hurt them in the second half of the season.

But, Jürgen Klopp will be optimistic about this season as he has an almost full-strength squad to choose from. The last time Liverpool and Norwich City faced each other in Carrow Road, Liverpool scraped through with a 1-0 win, thanks to a goal from Sadio Mane.

The big name who will be missing for Liverpool against Norwich City is left-back Andrew Robertson suffered an ankle injury which will keep him out for a few weeks. Curtis Jones will be unavailable due to a concussion protocol.

Jürgen Klopp revealed that both Joe Gomez and Virgil van Dijk are available to start, but did not confirm if they will. Both Thiago and Jordan Henderson joined pre-season late, and are not expected to make the Liverpool lineup against Norwich City.

Let’s take a look at the possible Liverpool lineup for Saturday evening.

Brazilian Alisson should start between the sticks for Liverpool on Saturday.

Liverpool will be boosted by the return of their star defender Virgil van Dijk, who will play his first Premier League game since that nasty injury against Everton. It will be interesting to see who lines up alongside him at the back in the Liverpool lineup.

Joe Gomez is also back from his long-term injury, Joel Matip is an option for Klopp, as is new signing Ibrahima Konate. The German coach may stick to the tried-and-tested lineup of van Dijk and Gomez for Saturday evening.

Robertson’s absence means that Konstantinos Tsimikas should start at left-back, while Trent Alexander-Arnold should start on the opposite side.

A few of Klopp’s key midfielders lack match fitness having returned recently from their breaks. Fabinho, Jordan Henderson and Thiago have all featured in just one pre-season game, the final pre-season fixture against Osasuna. 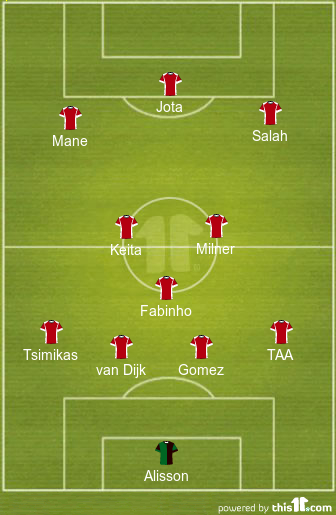 Fabinho could get the nod and play alongside James Milner and Naby Keita. Milner and Keita featured regularly in pre-season. Alex Oxlade-Chamberlain is another midfielder that Klopp could use against Norwich City.

Roberto Firmino started the last pre-season game against Osasuna and scored a brace, but he too, like his Brazilian compatriots, played in just one pre-season game. He could be an option off the bench for Klopp, with Diogo Jota likely taking the false nine position.