Manchester United will entertain arch-rivals Leeds United on the opening matchday of the 2021-22 Premier League season.

The Red Devils mauled Marcelo Bielsa’s Leeds side 6-2 at Old Trafford last season, and will look to dominate them again, this time in front of the fans.

Manchester United will head into the much-anticipated derby buoyed by a comprehensive 4-0 pre-season victory over Everton, with Mason Greenwood, Harry Maguire, Bruno Fernandes, and Diogo Dalot getting their names on the score-sheet.

Ole Gunnar Solskjaer will be desperate to get his team off to a flying start this time around after amassing just seven points from their first six fixtures last season.

New signing Jadon Sancho is in line for his Manchester United debut after linking up with his new teammates in training on Monday. Four-time Champions League winner Raphael Varane will soon become a Red when his move to the club is approved following the completion of his medical. He is likely to start Saturday’s game on the bench.

Dean Henderson will not make the Manchester United lineup after suffering from prolonged fatigue due to Covid-19 since last month. Jesse Lingard was ruled out of the Reds’ final pre-season friendly too after testing positive for Covid-19 and remains highly unlikely to feature against Leeds United.

Edinson Cavani is on an extended break following his participation at this summer’s Copa America and is expected to miss the start of 2021-22 campaign. Meanwhile, Marcus Rashford and Alex Telles are long-term absentees, and are not expected to make the Manchester United lineup.

David de Gea started the pre-season friendly against Everton and kept a clean sheet. He’s likely to retain his place in goal on Saturday.

Aaron Wan-Bissaka is an undisputed starter at right-back but will have to be at the top of his game against Bielsa’s side. After starring for England in the European Championships, Luke Shaw will aim to continue his dazzling form from left-back. He was one of Manchester United’s best players last season. 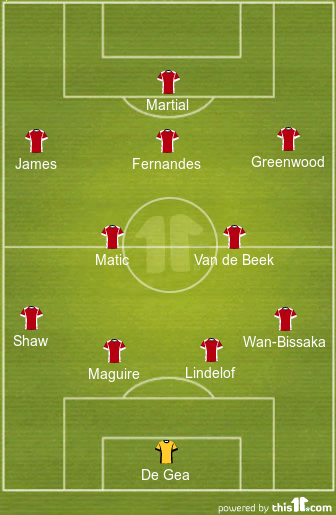 Harry Maguire and Victor Lindelof played well against Everton, with the former scoring a towering header past Jordan Pickford. So, Solskjaer is set to go with the same centre-back pairing on Saturday.

Nemanja Matic was one of Manchester United’s best performers in the pre-season and deserves to start the season opener at Old Trafford. The Serbian will sit in front of the defence and try dictating the tempo of the game.

Matic will likely partner Donny van de Beek in the Manchester United lineup. The Dutchman is eager to make a mark in the first game after a disappointing debut campaign in English football.

Bruno Fernandes, the heartbeat of Solskjaer’s side since arriving from Sporting Lisbon in January 2020, will start in his preferred no.10 role in the Manchester United lineup.

With his pace and direct running, Daniel James could start on the left flank for United. Mason Greenwood is likely to start on the other flank, with Anthony Martial spearheading the attack in Edinson Cavani’s absence.