Wife of Brazil and Chelsea defender Thiago Silva, Belle, has been spotted in France as she supports her husband in the friendly against Ghana.

Brazil face the four times African champions as part of preparation ahead of the World Cup in Qatar later this year.

In photos posted on social media, Belle was in her Brazil jersey as he watched from the stands in Le Havre.

The five times world champions are hoping to reclaim the title they last won in 2002 while Ghana eyes a semi-final berth in Qatar. 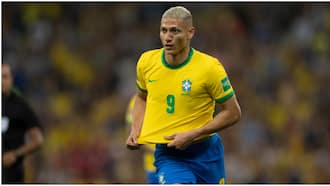 Silva played a pivotal role as goals from Marquinhos and Richarlison gave the Brazilians a healthy lead before half time.

Brazil have been drawn in Group H alongside, Cameroon, Serbia and Switzerland.

Ghana are in Group H together with Portugal, Uruguay and South Korea.

Earlier, Sports Brief reported that Richarlison netted a first half brace as Brazil cruised to victory against Ghana in their penultimate friendly ahead of the 2022 FIFA World Cup in Qatar.

The Selacaos got off to a bright start with Richarlison getting the first chance after just four minutes, but the Tottenham forward missed by inches wide. 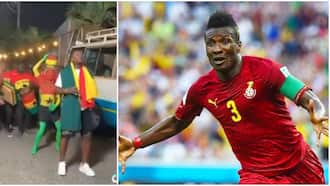 Mohammed Salisu has been on the lips of Ghanaians after an impressive debut for the Black Stars against Brazil.

The Southampton defender came on in the second half as Ghana prevented Brazil from adding to their three goals scored in the first half.

Salisu was solid preventing Neymar from netting Brazil’s fourth late in the game.