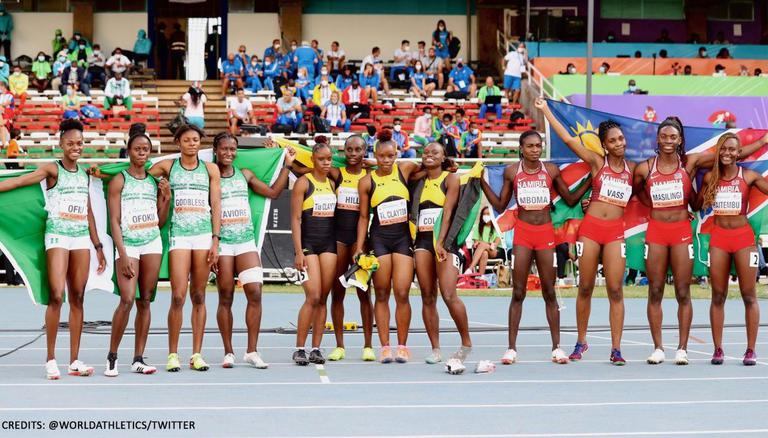 The Jamaican quartet of Tia Clayton, Tina Clayton, Serena Cole, and Kerrica Hill was on fire as they smashed the U20 world record of 43.27 set by Germany four years ago. They set an astounding time of 42.94 to take their 12th women’s 4x100m medal in the U-20 World Athletics Championships history and a fifth 4x100m gold overall. While Jamaica once again stole the show in the women’s event, other teams such as Namibia, South Africa, and Botswana were extremely impressive as well.

Christine Mboma, who won the women’s 200m title, helped the Namibian team finish on the podium for the first time ever in the relays. They won a silver medal in the women’s 4x100m relay with a time of 43.76. Meanwhile, Nigeria settled for the bronze with a season’s best finish of 43.90. This time also helped the country’s women to win their first 4x100m medals at the U-20 World Athletics Championships since the first edition in 1986.

The South African team comprising Mihlali Xhotyeni, Sinesipho Dambile, Letlhogonolo Moleyane, and Benjamin Richardson were incredibly impressive as they stormed the field to win the gold medal in the 4x100m. They set a whopping world U20 record of 38.51 to finish ahead of Jamaica who clocked 38.61. Meanwhile, Poland won bronze with a timing of 38.90.

Other U-20 World Athletics Championship events

Botswana convincingly won the men’s 4x400m relay as they set a world U-20 record of 3:05.22. Jamaica finished the event in second place with a season’s best of 3:05.76, while host nations Kenya beat Nigeria to win the bronze medal with a time of 3:05.94. Meanwhile, the Nigerian women won the 4x400m relay thanks to emerging star Imaobong Nse Uko. She helped her country to set a world U20 time of 3:31.46 to help her country win the gold medal.