A jovial Mauricio Pochettino waved to fans and signed autographs as he and his PSG team arrived at Manchester Airport for their flight back to Paris on Thursday morning.

The Argentine boss went out of his way to sign his signature for supporters in the departures lounge as he remained upbeat despite seeing his side squander a one-goal lead before going on to lose 2-1 to Manchester City in the Champions League.

The 49-year-old smiled for the several fans and photographers who were there to wave him off while other members of the PSG squad didn’t look quite as happy. 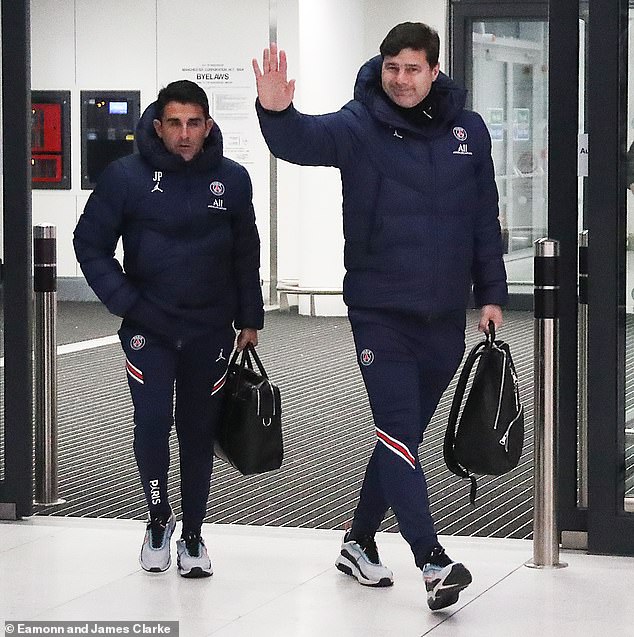 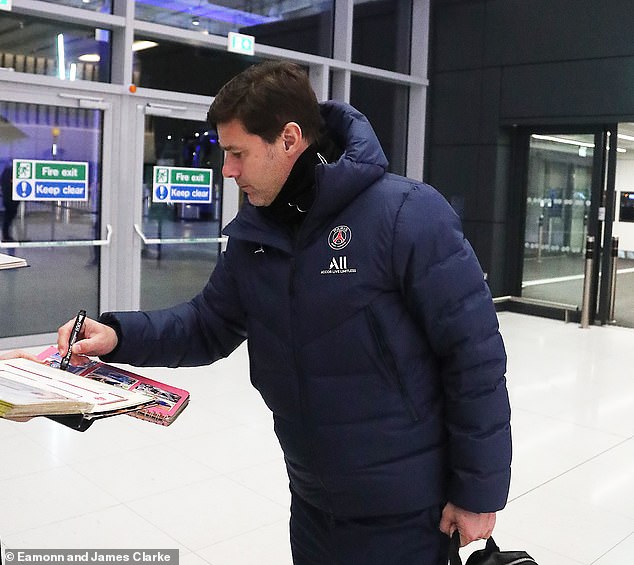 Kylian Mbappe, Lionel Messi and Neymar all cut tired and despondent figures as they made their way through the departures lounge at the aiport early on Thursday morning.

Mbappe scoring the opener at the Etihad but PSG’s ridiculous front-three couldn’t prevent their side from defeat in Manchester.

Raheem Sterling popped up at the backpost in the second half to turn in a City equaliser before Gabriel Jesus finished off a fine passing move to hand Pep Guardiola’s men all three points at the Etihad.

Pochettino’s disappointing return to England comes off the back off being linked with the vacant managerial role at Manchester United, with the Red Devils continuing their search for Ole Gunnar Solskjaer’s successor.

The former Tottenham boss is wanted by United and is also thought to be open to the idea of making the mid-season switch to Old Trafford after becoming unsettled in the French capital. 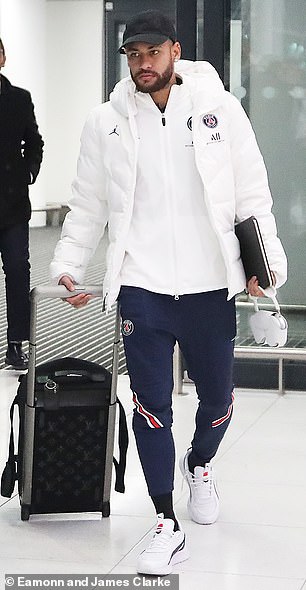 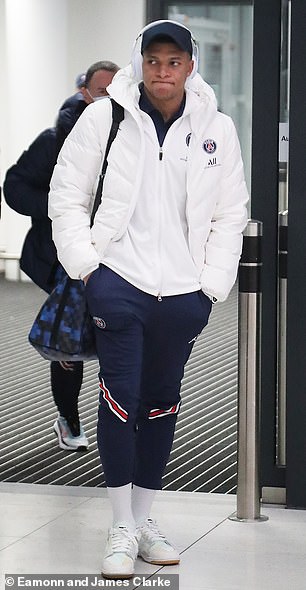 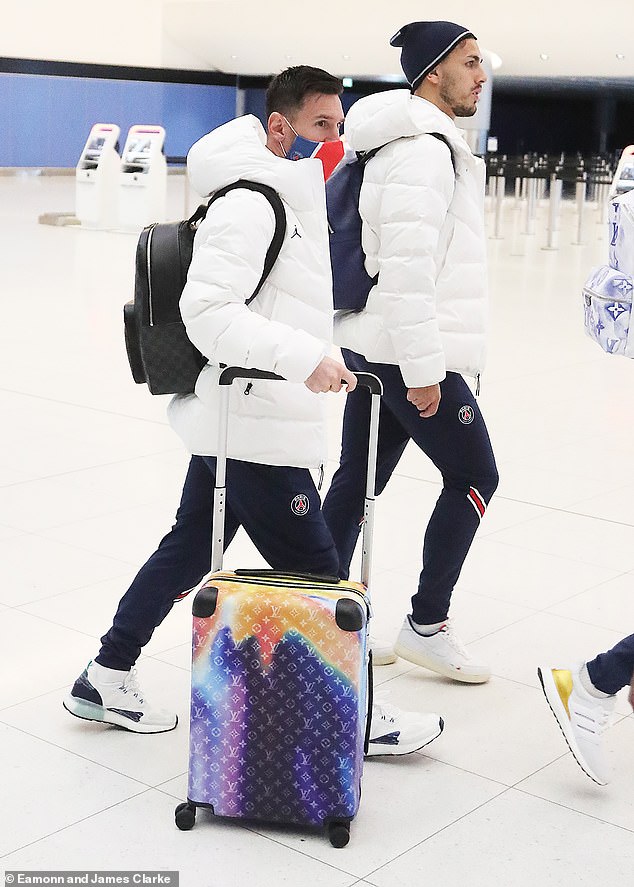 While Pochettino remained upbeat as he arrived at the airport, he refused to blame his side’s 2-1 defeat on the speculation surrounding his future.

‘The players know very well our situation,’ Pochettino said, when asked whether he had needed to reassure them over his commitment to PSG.

‘We know their situation. We are living in a business that rumours are there, sometimes negative, sometimes positive. That is not a thing to talk about – the rumours.’

Pochettino is one of the favourites for the United job but may struggle to prise him away from the Parc des Princes with PSG intent on keeping him. The indications are that PSG would be reluctant to let the Argentine depart mid-season and disrupt their campaign.

Pochettino is known to be interested in the post and was even happy to sign United shirts on Wednesday at The Lowry Hotel where PSG were staying ahead of their clash with City. 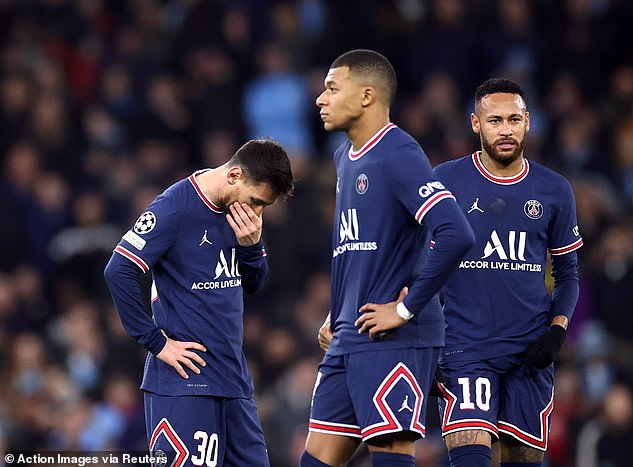 (Left to right) Messi, Mbappe and Neymar cut dejected figures in their 2-1 defeat by City

United will now focus on the strategy put in place after Ole Gunnar Solskjaer was sacked at the weekend, and step up their search for an interim manager to take over from caretaker Michael Carrick. He steered them into the Champions League last 16 knockout stage on Tuesday night with a 2-0 win at Villarreal.

Former Barcelona boss Ernesto Valverde and ex-Lyon coach Rudi Garcia have already held talks with United’s director of football John Murtough. Garcia said: ‘I will say nothing on the subject. I neither confirm nor deny.’

Lokomotiv Moscow’s head of sports and development, Ralf Rangnick, former Borussia Dortmund boss Lucien Favre and ex-Roma boss Paulo Fonseca are among the other names being linked with the temporary role.

But sources in Germany said on Wednesday night that Rangnick is cool on the idea of a short-term stint. 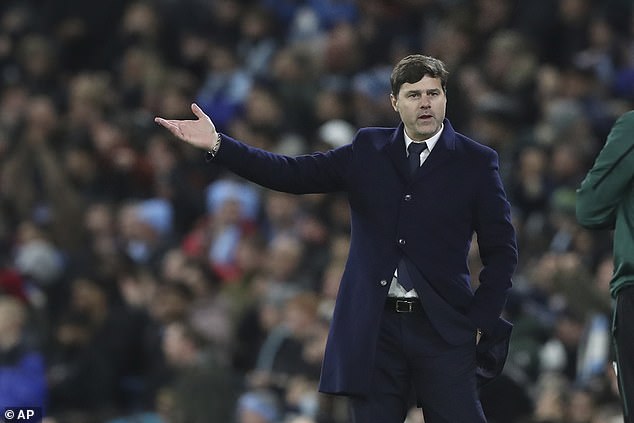 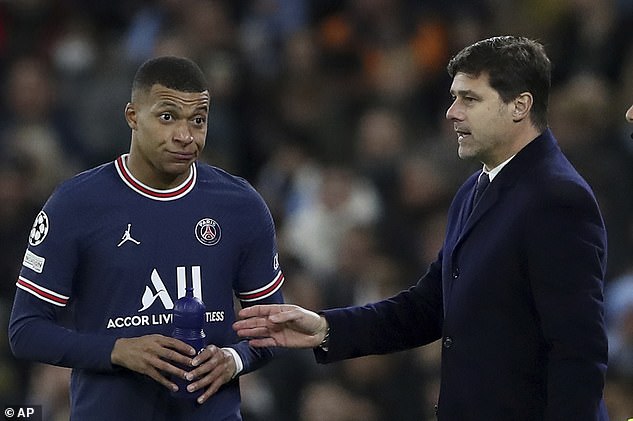 Although committing to two separate managerial appointments is a peculiar strategy, the Old Trafford hierarchy are said to be satisfied that an interim would provide stability and momentum while giving them the freedom to install a permanent replacement at the end of the season.

It also suggests that United know their preferred target will not be available until the summer — whether that is Pochettino or someone else.

Ideally, they would have kept Solskjaer in charge until then but United’s alarming dip in form forced the club into a change of plan.

While the search for an interim continues, Michael Carrick is set to stay in charge for Sunday’s trip to Chelsea after winning against Villarreal with goals by Cristiano Ronaldo and Jadon Sancho.