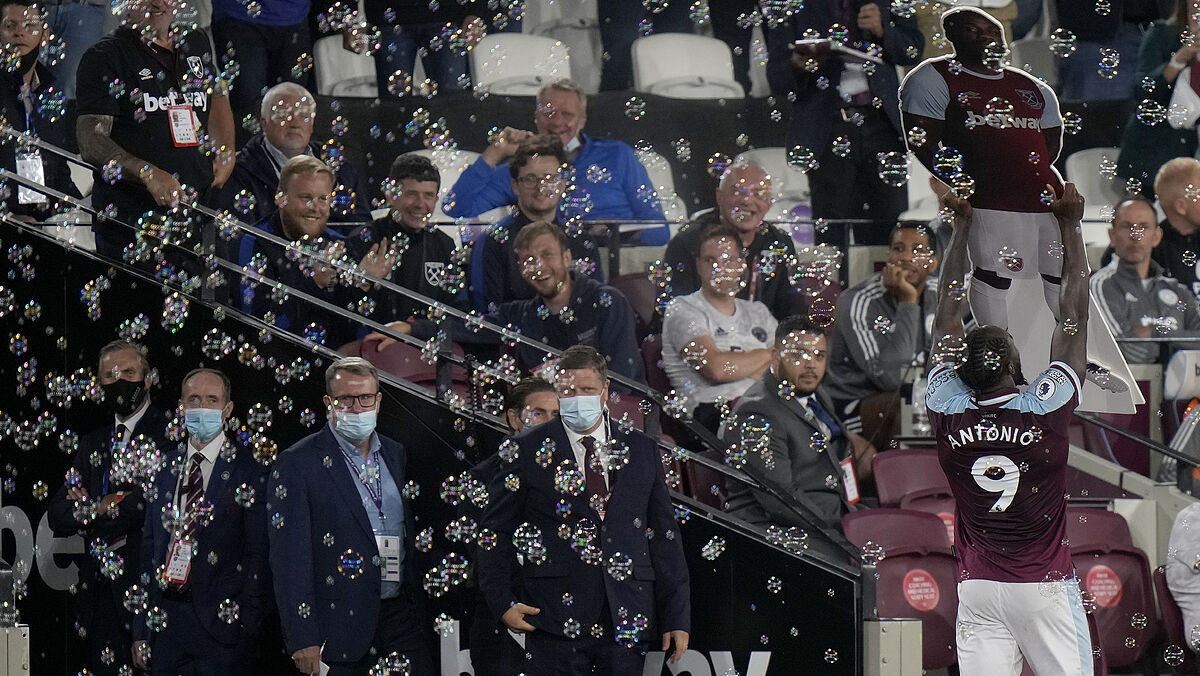 West Ham United top the Premier League table after thumping Leicester City 4-1 at the London Stadium on Monday night in what was a scintillating performance by the Hammers.

Their fourth goal of the game made sure that they surpassed both Chelsea and Liverpool on goals scored after finding the back of the net on eight occasions in their first two matches of the season.

The Hammers‘ eight-goal tally beats the combined total of Arsenal (0), Chelsea (5), Crystal Palace (0) and Tottenham (2), who have scored just seven between them.

The feel-good factor rang true throughout the London Stadium after West Ham‘s win against Leicester, as the crowd stayed long into the night singing and chanting.

The chants for Michail Antonio, the Hammers‘ new all-time Premier League top goalscorer was particularly noisy during the second half after he eclipsed the record held by club legend Paolo Di Canio, who had netted 47 goals in the Premier League.

Antonio, who has just recently pledged his allegiance to the Jamaican national team, scored his 48th and 49th goal for the Hammers and celebrated in strange fashion, as he danced with a cardboard cut-out of himself on the touchline.

The 31-year-old arrived at the club from Nottingham Forest in 2015 for seven million pounds and it took until late December of that year for him to become a regular feature for West Ham, as he started his career in east London as a right-back.

As managers came and went, the physically talented star moved his way up the pitch until David Moyes eventually saw his potential talent as a striker.

Positive signs ahead for the Hammers

West Ham are hoping that they can maintain the form of last year which saw them finish in sixth place and claim a spot in the Europa League.

Despite many rumours surrounding some of West Ham‘s key players they have been able to keep the core of the side that merited their sixth-place finish, and with a year more experience together, maybe the team can go even further than they have ever done so.

Antonio, Declan Rice, Tomas Soucek and Pablo Fornals have all returned in fine form, as has Said Benrahma, who has started to shine after his debut season in the Premier League last campaign.

The Algerian only started 14 games last season, scoring just one goal, but since the departure of Jesse Lingard after his loan spell came to an end, Benrahma has made the position his own, claiming two goals and two assists in as many games.

There is no doubt that Moyes and his backroom staff are making West Ham tick at present and should they be able to invest some money on new recruits, they could become a force to be reckoned with.

The Hammers have reportedly made a verbal agreement with Chelsea defender Kurt Zouma and are in the market for a back-up striker.

West Ham will host Crystal Palace on Saturday as they look to make it three wins in as many games.