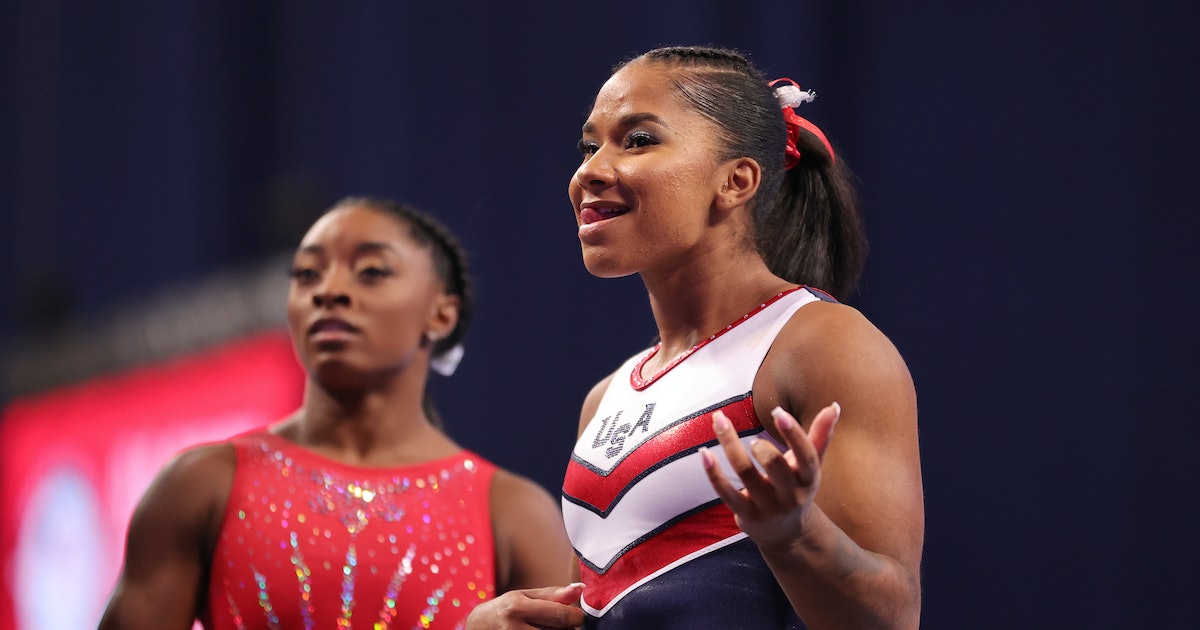 Despite Sha’Carri Richardson’s unfortunate suspension, the prospect of history-making moments during the Summer Olympics is high. When it comes to the U.S women’s gymnastics team, five of the six finalists to earn their spot in the group are heading to the Olympic Games for the first time ever, with the remaining member already known as a highly accomplished Olympian. Yes, in case you were wondering, that Olympian is thee Simone Biles.

Biles and her teammates are heading to the Tokyo Olympics this July with a lot of pressure on their shoulders. But each young woman on Team USA has both impressive stats on their resumes and the drive to take gold back to United States soil. Here’s a look at each of the six young dynamos on the USA women’s gymnastics team and the unique abilities they each bring to the squad.

Gymnastics fans are undoubtedly in for a treat this year, especially thanks to Biles at the helm of the women’s Olympic team. Biles’ accomplishments are miles long, and she currently holds the title of being the most decorated gymnast of all time. The 24-year-old from Spring, Texas, is a five-time Olympic medalist, a seven-time United States national all-around champion, and she boasts 25 World medals — 19 of which are gold. She’s also the first American female gymnast to earn a World medal for every event (floor exercise, vault, all-around, balance beam, team final, uneven bars). Not to mention, the difficulty level of her moves and technique is so high that officials virtually penalize her in order to discourage less-skilled gymnasts from attempting the stunts. The controversial rule has inspired ire among fans and a pointed response from Biles, but at the very least, it just goes to show how advanced she is. The Athleta brand ambassador’s career is blazing hot, and it wouldn’t be shocking if she scoops up more gold medals in the team competition at the Summer 2021 Olympics.

Sunisa Lee, along with Biles, Grace McCallum, and Jordan Chiles, will represent America in the team competition portion. Lee, 18, is the first Hmong American Olympic gymnast to qualify for the Games; as reported by Elle, her parents emigrated from the Southeast Asian country of Laos. Lee went from learning how to do flips on her bed as a child to making the U.S. junior national team at the age of 14 in 2016. In 2020 at the U.S. World Championships selection camp, Lee made headlines as she nearly beat Biles in the all-around event and qualified second overall for the all-around event during the Olympic trials. With all of these star-making moments behind her, Lee is primed to turn many more heads at the Olympics.

Even though the talented Chiles placed third in the all-around during the Olympic trials, the 20-year-old almost quit gymnastics several years prior to qualifying for the 2021 Olympics. It was Biles who convinced her now-fellow teammate to hang in there and suggested the Oregon-born Chiles move to Texas to train with her. Chiles made the move, and something surely clicked as her showstopping performances at the Olympic trials earned her a place on the team. Here’s to seeing if the Biles-Chiles duo goes undefeated in Tokyo.

McCallum is the fourth and final gymnast of the U.S. Women’s Team to perform in the team competition. The 18-year-old Minnesota native, per Deseret News, wasn’t even sure she’d qualify for a spot on the team after having surgery on one of her hands in January. During a press conference, she said she believed her “Olympic dreams were gone because the recovery was so long.” Still, McCallum triumphed with her floor and bars routines during the Olympic trials and was selected to compete for America.

Jade Carey and fellow teammate MyKayla Skinner are set to compete for Team USA as individual event scorers. In June, Carey, a 2019 FIG Individual Apparatus World and 2019 FIG World Cup gold medalist, wrote about her excitement for the Olympics on Instagram. “Dreams do come true … so incredibly honored to be apart of this team and represent Team USA at the Olympic Games. Tokyo here we come!! thank you to everyone who has supported me,” she wrote alongside a group photo with her Team USA crew. After the Olympics, Carey will attend Oregon State and will compete on the university’s gymnastics team in 2022.

Before cinching her spot on the Olympics team, Skinner didn’t think she would make it to Tokyo after a battle with the COVID-19 virus. The 24-year-old told People in June, “I survived, but I wanted to give up so many times. I was like, ‘I don’t even know if I can do this anymore.’” Being diagnosed with the coronavirus halted her training for the Olympic trials, but she recovered and will head to Japan with Biles, Chiles, Lee, McCallum, and Carey.

How To Watch The U.S. Women’s Gymnastics Team

To watch Team USA’s women’s gymnastics team in action this year, check out the Olympic Summer Games airing from July 23 to Aug. 8 on NBC, Peacock, the NBC Sports app, and NBCOlympics.com.